The nil nisi stuff refers, of course, to the recently departed. Once a modicum of polite time has passed they’re open, again, to critique. Which brings us to David Graeber. His thing about bullshit jobs was, well bullshit. Because he misunderstood the Keynes essay that was his starting point.

He argued that the working population should have more free time, pointing out that as far back as 1930 the economist John Maynard Keynes had said that by 2000 most people would be working a 15-hour week because of technological advances. What went wrong? “Technological unemployment, as he called it, did happen,” explained Graeber. “People have been talking about the rise of the robots, saying it’s nonsense — people have been saying that for years. But actually it did happen; it’s just that we made up jobs for people to seem to be working.”

Well, no. And as it happens I have, Blue Peter style, one I made earlier pointing out why:

I have to admit to being rather amused by David Graeber. He’s an anthropologist who teaches at my own Alma Mater, the London School of Economics. For all I know he may be a very good anthropologist. It’s not a subject I know much about so it would be difficult for me to judge. However, Graeber does so want to tell us all about economic matters, and there I can judge at least some of this claims. And if we’re honest about it usually he would have been better off if he’d wandered down the corridor to the economics department and asked for a little guidance before constructing his theories.

This latest idea of his appears to be that Keynes said we’d all be working 15 hours a week by now. We’re not and therefore it must be The Man keeping us down for fear that we’ll revolt against the system if we had enough free time. Well, interesting, provocative even, but neither anthropology nor economics are in fact a performance art. They’re supposed to be sciences even if social ones, and thus to have a modicum of an evidence base behind them, which, sadly enough, this theory doesn’t.

Here he is making his case:

In the year 1930, John Maynard Keynes predicted that technology would have advanced sufficiently by century’s end, that countries like Great Britain or the United States would achieve a 15-hour work week. There’s every reason to believe he was right. In technological terms, we are quite capable of this. And yet it didn’t happen. Instead, technology has been marshaled, if anything, to figure out ways to make us all work more. In order to achieve this, jobs have had to be created that are, effectively, pointless. Huge swathes of people, in Europe and North America in particular, spend their entire working lives performing tasks they secretly believe do not really need to be performed. The moral and spiritual damage that comes from this situation is profound. It is a scar across our collective soul. Yet virtually no one talks about it.

That’s pretty much the theory except for the speculations about why we’re all so oppressed by The Man. The actual Keynes essay is here for those who have not read it before. It’s very good, so if you haven’t, enjoy.

And here’s the point that Keynes didn’t quite grasp about what the future would bring: that the decline in working hours would be largely in the unpaid labor of running a household. And that decline more than makes up for the slower decline in those market working hours, the ones done for pay, that the modern world seems to be missing from his prediction. For the UK, roughly, paid working hours went from 48 a week or so to 35 today. Unpaid household working hours went from 60 odd to perhaps 15. We actually have had the reduction that Keynes said we would and which Graeber is shouting has been stolen from us by, umm, well, The Grinch, maybe?

Just to back this up, something from the Boston Fed on recent declines in working hours:

And then there’s this from the excellent Max Roser. Historical changes in market (i.e., paid) working hours: 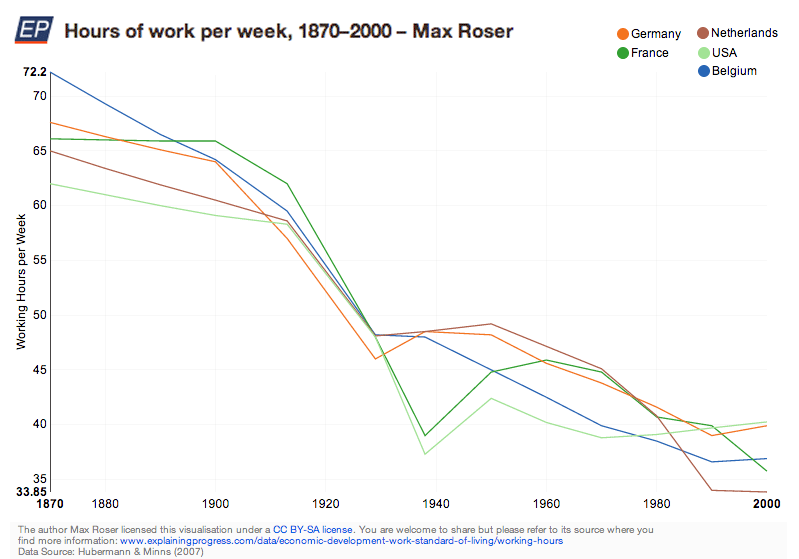 And then this which, in the second window, gives us declines in household working hours: 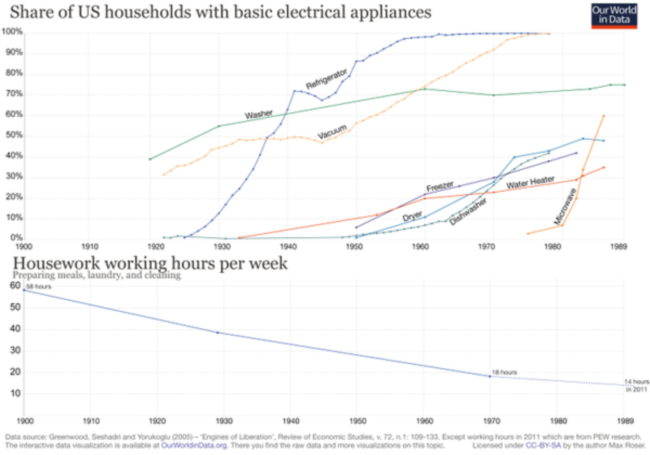 So, the theory doesn’t in fact hold water. Working hours have indeed declined just as Keynes said they would. It’s just that we preferred to take the automation, our increased wealth, in less scrubbing of the front doorstep and in more gossiping around the water cooler. And given that we do indeed get to make that choice ourselves, then who is to say that we’ve made the wrong one?

Thus the rest of his prescriptions are equally wrong. We do not need to upend the system, smash finance capital or any of the other teeming ideas being proffered.

As, actually, a wander down the corridor to the corridor of the economics department would have told him. We are, individually, the best judges of our own utility. And it’s long, long, been noted that we do in fact take some portion of our greater wealth as leisure.

We don’t in fact have a problem here, so nothing need be done.

Tweet
SUPPORT US WITH A SUBSCRIPTION?
Previous articleWe Do Hope That Facebook Carries Out This Threat
Next articleHow – Why? – Does Michelle Goldberg Have A New York Times Job?

So, That Answers The Question About Arun Advani Then

Arun Advani was on that Wealth Tax Commission. You know, the one that ended up saying that it would be just fine to have...
Read more
Economics

In Praise Of Benign, Even Helpful, Beneficial, Tax Competition

Richard Murphy tells us that it is not possible for there to be anything other than harmful tax competition. All such competition must, by...
Read more
Economics

The Point Of Inventions Is To Be Able To Use Them, Not Sell Them

This is a common complaint about the British economy, that we can invent things but don;t then go on to make fortunes out of...
Read more

in British English
expunct (ɪkˈspʌŋkt)
VERB (transitive)
1. to delete or erase; blot out; obliterate
2. to wipe out or destroy

So Bjorn Lomborg Is Proven Right Once Again

Back when Bjorn Lomborg brought out the Sceptical Environmentalist my word how people laughed. He pointed out that well, actually, solar power had been...
Read more

So, That Answers The Question About Arun Advani Then

Arun Advani was on that Wealth Tax Commission. You know, the one that ended up saying that it would be just fine to have...
Read more

The claim is that as oil company CEOs are paid with stock therefore they conspire to boil the planet. That is, no really, what...
Read more

Big Meat Is The Next Enemy After Big Oil

We would, perhaps, hope for a little more logical ability among those who write the newspapers and news sites for us. Take this example...
Read more

In Praise Of Benign, Even Helpful, Beneficial, Tax Competition

Richard Murphy tells us that it is not possible for there to be anything other than harmful tax competition. All such competition must, by...
Read more